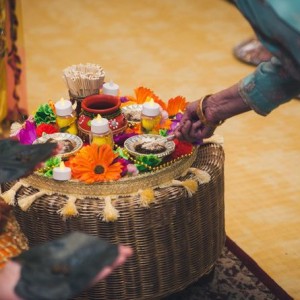 Those
amazing henna designs, bright ethnic dresses, and wedding music –the festive
aura in full swing! Who doesn’t love it? If you happen to adore the mehndi but
aren’t too sure about the basic concept behind it, there’s some great news for
you.

In
Indian culture, big fat weddings are an absolute norm. No matter which district
or religion you may belong to, there’s one thing for sure. You’ve probably attended
or been a part of a mehndi ceremony.

Termed
as the most absolute essence for an Indian bride’s look, the concept behind a
true mehndi celebration is more than
meets the eye.

And
that’s exactly why it deserves a special mention. Below, we’re breaking down
the quintessential mehndi function
while glancing over its significance in Indian culture. So let’s get right into
it.

Unraveling
the ancient history behind the Mehndi term

Did
you know that the art of mehndi dates back to centuries ago?

Yes,
it’s considered to be the most ancient form of body art today. Some predict its
arrival to be as early as the Vedic age or before, while traces of its
incorporation in mummification has also been noted.

Mehndi
is commonly referred to as Henna
Ceremony in some Muslim cultures while others such as the Bengals term it
as Gaye Holud.

The
term Mehndi arises from the Sanskrit word ‘mendhika’ that pertains to the henna
plant. It is also believed that the Princess Cleopatra painted her body with
mehndi, owing to its natural benefits.

Today, the mehndi celebration is widely implemented as a tradition of festivity, commonly applied on the bride, her friends and family members. At the same time, it is a grand ceremony that is prevalent amongst Indian Muslims, Hindus, Sikhs, and Christians too.

Today,
the mehndi celebration is widely
implemented as a tradition of festivity, commonly applied on the bride, her
friends and family members. At the same time, it is a grand ceremony that is
prevalent amongst Indian Muslims, Hindus, Sikhs, and Christians too.

Today,
it is common to have mehndi applied on the bride’s and groom’s hands before the
engagement or wedding day. The ceremony symbolizes intricate application of simple mehndi designs over the bride’s
hands as well as on feet.

The
art of mehndi symbolizes an aura of positivity and good omen for the bride and
groom in Indian culture, as they enter a new journey in their life. This
beautiful ceremony or pre-wedding ritual can be seen in the entire Indian
subcontinent including a number of neighboring nations too.

Understanding
the importance of Mehndi in India

In
India, mehndi stands for the bond of holy matrimony. Therefore, Indians term it
as shagun or plain good luck. Mehndi also represents love, care and affection
that the couple and their families hold for one another. Some cultural facts
about mehndi include:

The
Mehndi ceremony- an amalgamation of color, life and music

Mehndi functions, held one day prior to the
wedding, can be seen as an amalgamation of color and liveliness and musical
celebrations. Often, the sangeet ceremony is combined with the mehndi for an
added dose of festivity.

Both
the groom and bride’s families actively exchange cheer and glad tidings,
amongst an aura of fireworks, dance and delicious Indian culinary delights.

It
is not uncommon for the bride to sport her groom’s initials in her mehndi
design. On the other hand, ice breaking games comprising of the groom searching
for his initials in his bride’s hands is also observed for some post wedding
fun.

The
great significance that mehndi holds in Indian culture can never be denied.
Today, it continues to be honored and cherished for obvious reasons by Indians
across the globe.